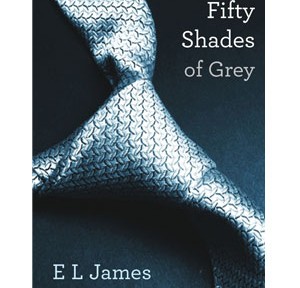 I read 30 pages, which is a little over 3 chapters.

E. L. James is quite brilliant.  She dials back her writing so anyone smarter than a fifth grader can think, “I could write this.”  Too often, authors waste time with cliché literary techniques like describing stuff.  Some authors have a problem of ‘showing’ rather than just ‘telling’ with their writing.  James literally tells readers what to feel and think.  i.e. – He’s hot.  Suddenly, she’s hot.  Why use imagination?  Ain’t no body got time fo dat.

Even though the story is fundamentally told in the first person perspective of Anastasia Steele, the book is actually just non-stop dialogue.  It has the charm of reading a direct-to-video screenplay that is devoid of any scene headings, action sequences, parantheticals, and camera directions.  The story carries itself on dialogue styled in honor of the harmonious yimmer-yammer of divorced housewives dining on a few boxes of wine, all the while admiring the allure of a dangling mosquito zapper.  It’s musically musical.

I was impressed with her frequent ability to encompass an entire complex emotion into unique singular words such as “happily”, “nervously”, and “quickly”.  As a reader, nothing makes me feel more rushed with frantic anxiety than when an author writes the word “quickly” to describe action.  Commoners define her technique as adverbs.  I call it magic.  Adverbs are sometimes considered cheap and hollow because they lack informative value.  But James glitters the pages in so many adverbs, the story flows at a swiftly magically magical pace with a majestically mystic tonely tone…writtenly.

From what I’ve read of the book, I assumed emoticons would complement James’ literary sophistication.  I guess she wanted to challenge her storytelling prowess and decided to not employ another powerful literation aid.

In less than 3 full chapters, James swings the setting from Anastasia’s home, to Christian Grey’s corporate building, then to his office, back to Anastasia’s home, later at her work, again at her home, and then a return to Grey’s corporate building.  I’m sure I missed a lot more of the book’s teleportation.  It was difficult to follow.  I may be too prude because I’m not comfortable with any author’s rapid casual slutting of settings.  Every other page the story is in a new place with no distinction or reason.

My favorite part of the book was reading Christian Grey’s dialogue in the voice of Dr. Evil from Austin Powers.  James’ vague description of Grey’s office had just enough detail to trigger my memories of Dr. Evil’s lair.  And then when it came time for his introductory dialogue, I had the best laugh hearing the puny voice of Dr. Evil speaking into his pinky finger.  I’m sure the author had more sincere and serious intents, but the shoe fit perfectly.

I am not going to finish reading the miracle book Fifty Shades of Grey.  I won’t dare further taint the pages with my unworthy eyes.  Reading the phrase “I blush” or “I flush” a million freaking times in 30 pages is just not for me.  I will be earnest saying E. L. James deserves a sincere tip of the hat for the massive popularity of her trilogy.  I think the writing is poor, but she managed to captivate a new world of readers.  Anything that gets people to read is all good with me.

One thought on “Review: Fifty Shades of Grey by E. L. James”